Professor Josefina Pérez Arantegui (GEAS group) has published in the Heraldo de Aragón supplement “ Third Millennium ” (November 30, 2021), in the section “With Eyes of Science”, an informative article entitled: “The naked maja (Goya): the chemical secrets of a pink skin”.

At the beginning, she describes: “ The naked maja ” by Francisco de Goya y Lucientes fascinates, among other things, because of the light it transmits. Goya did not paint it on a white oil, he never did, he prepared his canvases in an orange-colored whole. This is revealed by electron microscopy, capable of seeing far beyond the colors that are in the foreground. The painter achieved the pinkish tone of the skin with vermilion, the blue details with Prussian blue, and the yellow with lead and tin antimoniate.

Goya covered the canvases with a reddish layer that he himself prepared with lead white and iron oxides, which served as a background and, at times, became transparent under other pigments.

With this work, together with his sister “ The dressed maja “, Goya reinterprets the classic theme of Venus lying on his bed. Together with other paintings by Goya, they constitute two masterpieces of universal painting. 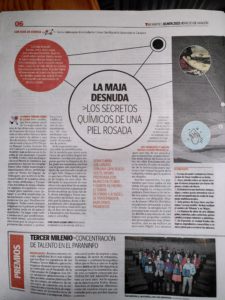 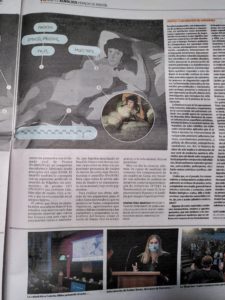