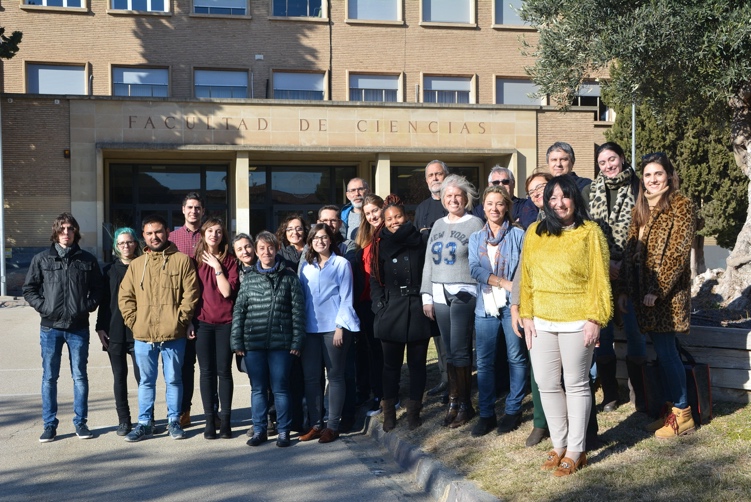 The “Analytical Spectroscopy and Sensors” (GEAS) research group was established in 1982 by the Department of Analytical Chemistry of the University of Zaragoza.

It has been part of the Area of Chemical Science and Technology of the Institute of Research into Environmental Sciences of Aragon of the University of Zaragoza (IUCA) since its foundation in 2008.

A POCTEFA Event is held to present the results of the OUTBIOTICS Project, coordinated by the GEAS group

The OUTBIOTICS Project, coordinated by the GEAS research group, has been selected to be able to present its results at the POCTEFA event, which will...

END_OF_DOCUMENT_TOKEN_TO_BE_REPLACED

The Ministry of Science and Innovation has awarded a knowledge generation research project (2021 call) to the GEAS Group.

The Ministry of Science and Innovation has awarded a research project (2021 call) to the GEAS Research Group, in the 2021 call for Knowledge...

We are a Reference Research Group recognized by the Government of Aragon and the University of Zaragoza. The Group is the leading component of the NANOBACT Action Group of the Iberus International Campus of International Excellence formed by the Universities of La Rioja, Lleida, Pública de Navarra and Zaragoza.

The group was a pioneer in the characterization of nanomaterials and has lines of research in spectroscopy, electroanalytical techniques, electron microscopy and development of (bio)sensors.

Here you will find our scientific production.

GEAS, an international point of reference

The GEAS group began its coordinated research activities in 1983. The group sets an international benchmark in the field of analytical nanometrology, in the research and development of analytical (bio)sensors, and in archeometry and heritage analysis.

In the early 21st century it began a line of research in Analytical Nanometrology to develop techniques and methods of characterization and multielemental chemical and functional speciation of nanoparticles (both natural and artificial), macromolecules, and biocolloids.

In another line of research, since the early 1990s, the activity of GEAS has been focused on the designing and construction of electroanalytical and optical-spectroscopic sensors, proposing new biosensors based on biorecognition processes with enzymes, aptamers, and antibodies (immunosensors ).

In a third line of research the group studies the characterization of Heritage materials through archeometry procedures and the use of non-destructive instrumental techniques. These techniques allow a better understanding and preservation of the artistic and historical heritage, with special emphasis on the study of ceramics, pigments, and organic waste.

The GEAS group leads the NANOBACT Action Group of the Iberus International Campus of International Excellence, which is formed by the Universities of La Rioja, Lleida, Pública de Navarra, and Zaragoza

The GEAS Group, in its almost forty years of history, has given rise to other specialized analytical research groups. For example, “Nanosensors and Bioanalytical Systems”, “Chemistry and Environment”, “Rapid Analysis Methods with Spectroscopic Techniques” … etc. These groups are an international reference in some of their lines of research.